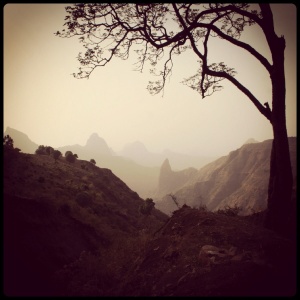 People often ask me, as people do, if it feels like time has flown by. I often answer, as people rarely do, that no, it hasn’t really. Coming to know Christ has filled my heart with the supernatural desires to be with him where he is (John 14:3), to see him face to face (1 Corinthians 13:12), to inherit him as my portion forever (Psalm 73:26). Yet simultaneous years of vacillating depression have made him feel impossibly far away. Is time flying? Yes, as it so mortally does. But even as good as life is, it regularly feels like a prison sentence inside my most honest emotions.

Welcome to my journey with depression.

Interesting enough, I don’t have much memory of struggling with depression until a few years after I had become a Christian. I had experienced those sad moments common to teenage transition, but nothing prolonged or abnormal. It was late high school—and the closest I had ever felt to Jesus—when things began to darken. I felt a deep sense of sadness and disappointment with myself and the world. My motivation plummeted and my introversion skyrocketed. Even though I had started varsity basketball for four years and was on the brink of competing for a state championship as a senior, I nearly quit the team. While at a summer scholar program I avoided social interaction as much as possible, and even remember once hiding behind a hedge and weeping for an entire afternoon. Worst of all, I tried acting like nothing was wrong.

The one time that I do remember sharing my sorrows was when I broke down in my youth minister’s office. Wearied by putting on a show as a Christian who had it all together, I wept and told him life was just too hard. He pointed me to John 6 and asked the same question that Jesus asked the twelve after many of his followers left him: “Do you want to go away as well?” That question, along with Peter’s answer, has echoed in my soul for almost fifteen years. Many dark days the only glimmer of hope I could muster, as sad as it is to say, was that I knew I had nowhere else to turn for life.

Things grew even worse in college. My freshman year I began having trouble getting out of bed. Sleep was my refuge because it was the only time of day I didn’t have to think. It was the only break I could get from myself. I actually put my mattress on the floor under my bed and draped blankets over the bed frame so that it was pitch black. Now that I think about it, it was a lot like a casket. On really bad days I would try to sleep a full 24 hours. Morning was the worst. I guess the thought of making it through another whole day was too daunting for my crushed spirit. “The cloud,” as I called it, greeted me as soon as I opened my eyes.

One question that’s good to ask those who get so low is if they ever have thoughts of suicide. I can say that I never considered ways to end my life. But what did develop in me was a longing for the darkness to end. On my best days that meant a hunger to know Christ and be with him. On my worst days it looked like me finding ways to ease the pain on my own, such as by overworking, overeating, or looking at pornography. Rarely did I tell anyone how I was feeling. I was convinced that no one would understand. I also thought they might tell me I needed counseling, or worse, medicine. Since no one ever talked about those things in the church, I just assumed that they were bad things.

When I moved overseas to serve as a missionary, I thought that my woes would finally come to an end. I was convinced that most of my troubles were from a lack of perfect obedience to Christ’s commands and a deep sense of his disappointment with me. As I gave myself fully to making disciples, I thought he’d be proud and I’d be free. Yet after two years of great success, one evening at a friend’s dining table I suddenly passed out and appeared to have a seizure. I was hospitalized for a week, but all test results were negative. I remember my company’s nurse sitting at the foot of my bed and speaking the humbling words, “Even though there’s nothing physically wrong with you, because of your stress and anxiety levels you are a very unhealthy man.” I spent the next month in mandatory Christian counseling.

It was the hardest month of my life. And the best. They diagnosed me with chronic low-grade depression and acute cyclical depression. The counselor dug into many of the darkest nooks of my soul. For the first time I was forced to face the worst of me head-on—and not run away. It didn’t solve everything. I still have the cloud that greets me every morning, and seasons where I fall apart. But if I can boil years of healing down to a half-sentence, it’s here that Jesus began to teach me that it’s ok not to be ok.

5 thoughts on “The Day the Sky Went Black: Reflections from My Journey with Depression, Part One”