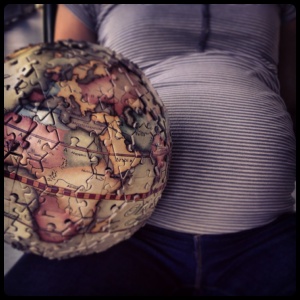 As a father of two yet born, one gone to be with the Lord and the other due in less than two months, on this subject I tread soberly. Yet my heart is filled with the unfounded wonder of fathering, sharpening little arrows to shoot further and faster than I ever myself will have known. If they are to dwell with me for a time then they are sure to learn grace. Not because I’ve got my Jesus Story Book Bible in one hand and a catechism in the other, but because I’m certain to fall flat on my face, as I faithfully do each day. And as my sighs give way to songs, my pain to glory, and my losses to riches in Christ [1], they’ll somehow see a man on a mission to know this one who gives him such grace (Philippians 3:10).

Grace and mission. And family.

The phrase that comes to mind is taken from a church in Houston, Texas whose mission statement reads, “We exist to see everyone transformed from a member to a missionary.” Word. But what if that was a family mission statement? What if families were responsible for making disciples, not just church leaders and programs? Men like Timothy Paul Jones and Randy Stinson argue for just that, pointing to Deuteronomy 6, the Shema:

What a marvelous, countercultural idea! Parents begging God to cultivate the soil in their children’s hearts and then faithfully planting and watering tiny seeds of the gospel in them rather than simply letting the church professionals handle it on Sundays. Yet thankfully the scriptures continue beyond Deuteronomy, and help us see more clearly that the Law isn’t the end in itself—it’s meant to tower ominously over us as a constant reminder of our need for grace. Too bad much Christian parenting rarely gets past the Shema. The law reigns supreme in many of the best Christian households, and by default it teaches what artists Shane and Shane have captured well in their song, “God Did“:

So a culture of the gospel of grace, and the embarrassing vulnerability that it takes, is perhaps the best thing we can offer our children. Parents who are learning to give up their endless attempts at being law-keepers are only those parents who are awakening to the One who was cursed for their law-breaking (Galatians 3:10-14). And parents who are coming alive to Jesus are parents who are following him into his mission. Who is first on their list to see transformed from member to missionary?

Yikes. There’s probably little that naturally strikes at the heart of a parent more than the thought of their child in ebola-doused West Africa or among decapitating terrorists in the Middle East. But for those parents familiar to the grace that cost God everything, they are gently shepherded to the more striking thought of those who, without a Savior, will pay the price themselves.

One such couple was the parents of famous 19th century Scottish missionary, John G. Paton. The remarkable account of his life composed in a lost eloquence, an autobiography titled Thirty Years Among South Sea Cannibals, is worth a million bucks, but actually just a free kindle download. There Paton framed his call to mission in the overwhelming influence of his parents:

The “closet” was a very small apartment betwixt the other two, having room only for a bed, a little table and a chair, with a diminutive window shedding diminutive light on the scene. This was the Sanctuary of that cottage home. Thither daily, and oftentimes a day, generally after each meal, we saw our father retire, and “shut to the door”; and we children got to understand by a sort of spiritual instinct (for the thing was too sacred to be talked about) that prayers were being poured out there for us, as of old by the High Priest within the veil of the Most Holy Place. We occasionally heard the pathetic echoes of a trembling voice pleading as if for life, and learned to slip out and in past that door on tiptoe, not to disturb the holy colloquy. The outside world might not know, but we know, whence came that happy light as of a new-born smile that always was dawning on my father’s face: it was a reflection from the Divine Presence, in the consciousness of when he lived. Never, in temple or cathedral, on mountain or in glen, can I hope to feel that the Lord God is more near, more visibly walking and talking with men, than under that humble cottage roof of thatch and oaken wattles. Though everything else in religion were by some unthinkable catastrophe to be swept out of memory, or blotted from my understanding, my soul would wander back to those early scenes, and shut itself up once again in that Sanctuary Closet, and, hearing still the echoes of those cries to God, would hurl back all doubt with the victorious appeal, “He walked with God, why may not I?”

As Paton later wrestled with a deep sense of burden for those who had never heard the gospel, and people chastised him for trading in the work among his lost countrymen for cannibals sure to cook him, his parents wrote to him:

Heretofore we feared to bias you, but now we must tell you why we praise God for the decision to which you have been led…When you were given to them, your father and mother laid you upon the altar, their first-born, to be consecrated, if God saw fit, as a Missionary of the Cross; and it has been their constant prayer that you might be prepared, qualified, and led to this very decision; and we pray with all our heart that the Lord may accept your offering, long spare you, and give you many souls from the Heathen World for your hire.

Parents who make little missionaries are parents captivated by grace.